Blastomycosis in the Upper Peninsula 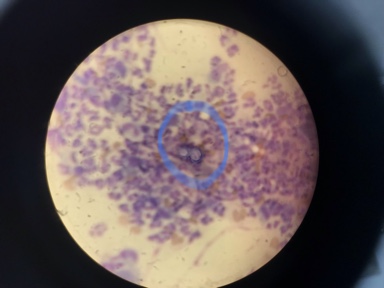 Blastomycosis is a fungal infection that is caused by a fungus called Blastomyces dermatitidis. The Upper Peninsula is a big area for these types of infections because this fungus likes to reside in moist, acidic, and rich soils with decomposing organic matter. Other common areas for this type of fungus includes the river basins around Mississippi, Missouri, Tennessee, and the Ohio rivers. This fungus usually can be transmitted to a dog through a puncture wound with a stick or primarily by inhalation of the fungal spores. Blastomycosis most commonly affects dogs and occasionally cats as well.

What’s unique about blastomycosis is that even though it commonly infects the lungs and skin, it can also infect the bones, eyes, and even nervous system of animals. Clinical signs a dog or cat will show with blastomycosis can vary depending on the type or organ system involved. These signs can include fever, weight loss, coughing, difficulty breathing, loss of appetite, skin rashes/draining nodules, lethargy, and lameness.

Diagnosis for this disease is usually made by taking a needle aspirate of an easily accessible lesion (skin, lymph nodes), sputum/tracheal swab and identifying the fungus underneath a microscope, blood serology test or urine test. Radiographs can also help us in diagnosing a blastomycosis infection if the respiratory system is mainly involved.  The image seen above is taken through a microscope and is a thick walled budding yeast that was obtained from a sputum sample at our clinic.

Unfortunately, blastomycosis is a difficult fungus to completely treat. Treatment is aimed at placing the animal on at least a 4 month course of anti-fungal medication until active disease is not apparent. In mild cases, only about 70% of animals will be clinically cured while another 20% may have recurrence after treatment. Prognosis for blasto depends on the severity of the infection. In mild cases with lung involvement, the prognosis is fair to good, but if there is severe lung involvement or if the nervous system is involved, then the prognosis can be very poor.

Even though the Upper Peninsula is considered a common area to contract blastomycosis, the prevalence of this disease is about 1-2% and unfortunately there is no preventative measure to keep from contracting the disease.  So hopefully this article was informative and has not turned you into an agoraphobe. If you suspect your animal has signs consistent with blastomycosis, contact your veterinarian as soon as possible.